The unexpected effect of high-speed trains on board talent 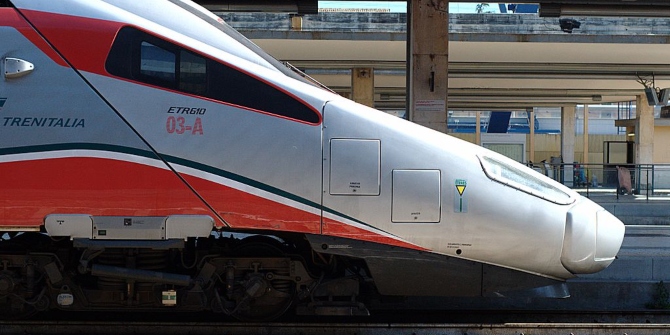 London-Paris, Barcelona-Madrid, Rome-Bologna – what is common among these city pairs? Surprisingly enough, travelling between these cities is faster by train than by plane. In fact, fast trains connect Europe quite well, allowing passengers to hop from city to city via rail.

Many passengers prefer taking trains over flying. One steps out at the city centre directly, wastes no time to deal with security checks and enjoys uninterrupted work or rest. And although critics claim that the financial costs of building high-speed rail are excessive, supporters envisage numerous economic benefits from improved transportation networks, such as a smoother circulation of goods or tourism flows. We show that, even further, it contributes to boosting corporate governance in private firms by attracting more suitable directors from the train-connected cities.

By widening the pool of available directors, the high-speed train may favour better firms to scale up the quality of their governance. We exploit a gradual introduction of the high-speed train service in Italy as a shock to the pool of potential directors to examine its effects on the quality of corporate boards’ appointments. We follow over 75,000 small, medium and large Italian firms and their 209,000 directors during the 2005-2016-year period. To measure how well directors fit companies in which they serve we study how close the match between firm quality and its board talent is.

Access to a greater talent pool via high-speed train line significantly improves the quality of the firm-director match. For example, approximately 51,000 directors serve on boards in Milan and 11,000 in Bologna. These numbers approximate quite well the overall number of individuals whom companies can appoint for their boards. We find that a city like Bologna, which opens a high-speed train line to Milan, decreases the firm-board mismatch by 2.4 per cent of a standard deviation. The impact primarily comes from firms close to the high-speed rail station and weakens moving further away. This suggests that directors take into account travel length not only across cities but also within cities.

The effects on board appointments take place “via the train line”. A fast-train connection to Bologna increases the share of directors who were born or have director-experience in Bologna in firms located within a ten-kilometre radius from the station in each connected city. Interestingly, in these cities the share of directors coming via the high-speed train rises while that of individuals with experience in the same or another “non-train” locality declines.

Board diversity along dimensions such as gender, age or race is often spelled out as a synonym for board quality. We find that the high-speed train introduction encourages the change in generations on corporate boards by increasing the presence of young directors, and reducing that of older ones, while there is no effect on the fraction of females on boards. This highlights the effect heterogeneity based on potential directors’ willingness to commute at long-distance – it is likely higher for the young, while may be depressed for females, who may find it more difficult to reconcile family duties with the career.

The increased director mobility due to the high-speed train line has important effects on the labour market for corporate directors. First, the average board talent increases in firms with access to the pool of potential non-local directors. Second, the number of board appointments per director rises, leading to higher board interlocking. This suggests that a single (talented) director now becomes available for more than one firm but may also imply that directors spend lower effort with a single firm and/or may lead to more conflict of interest.

Board appointments are an equilibrium outcome of a matching process between firms and potential directors and, therefore, not all firms are likely to gain equally from a larger pool of potential directors. Our study supports this notion by showing that more productive companies are better able to attract well-fitted directors, which happens at the expense of the less productive firms.

To shed light on the effects of better-suited board appointments on firm outcomes, we demonstrate that the lower firm-director mismatch is associated with higher firm revenues and total factor productivity. This finding suggests that better board appointments make firms more efficient. It is also consistent with the idea that the scarce supply of suitable directors hinders firms’ growth and performance. Similar to the effects to the director-firm match, the effects on productivity are also larger for more efficient firms and smaller for the family firms.

This paper exploits a novel rich dataset to illustrate how the high-speed train introduction in Italy improves corporate governance and is associated with favourable effects on firms’ growth and productivity. The evidence highlights an additional economic benefit of such infrastructure investments, with the potential to benefit the overall efficiency of the productive system. On top of improving mobility, policy implications stemming from the study may suggest investing in the quality of the local director pool, for example, by raising human capital.

Audinga Baltrunaite is an economist at the research department of the Bank of Italy, economics and law division. She also affiliated to the Dondena Gender Initiative, Bocconi University. Audinga has received her PhD in economics from the Institute for International Economic Studies (IIES), Stockholm University. Her main research areas are public economics, political economics and gender economics.

Egle Karmaziene is an assistant professor at VU Amsterdam and a research affiliate at Swedish House of Finance (SHOF). Her research interests are in the fields of financial markets and corporate governance. Egle has been an assistant professor at Groningen University and a visiting PhD student at LSE. In 2016, she received a PhD in finance from the Stockholm School of Economics.