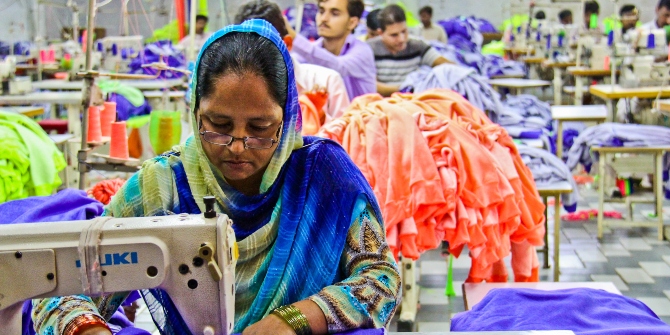 Activists and academics alike hailed the conclusion of the Accord on Fire and Building Safety which offered hope that lessons had been learned from the carnage of the 2013 Rana Plaza building collapse in Bangladesh. Lauded as a “landmark,” a “gamechanger,” a “breakthrough,” this transnational industrial relations agreement (TIRA) between 222 global brands and retailers and IndustriALL and UNI Global Unions appeared to offer a new way forward in the governance of global supply chains at a time when the serious limitations  of auditing-based corporate social responsibility (CSR) approaches were increasingly recognised. More than six years on, how far has this transformative potential been realised?

In its own terms, the Bangladesh Accord has been a huge success. When its five-year term came to an end, the accord reported that 85 per cent of safety hazards it had initially identified in factories had been fixed, with 150 factories fully completing the safety remediation, and 857 factories having implemented over 90 per cent of the remediation. Independent research confirms that the safety of accord factories has been transformed. A survey of 1500 Bangladesh garment workers by Naila Kabeer and colleagues found that 96 per cent of workers in accord factories felt safe in their factory, 90 per cent reported that they could refuse to go into the factory if the building was perceived to be unsafe, while over 90 per cent had received health and safety training. Since 2015, no worker has died in an accord-listed factory as a result of a safety issue covered by the accord. Beyond the accord remit of safety, many problems such as abuse and low wages persist in Bangladesh garment factories, but nonetheless the accord has had unprecedented success in achieving its aims, in an industry where sustained improvement in standards is rare.

What accounts for this? Several features stand out. The agreement between the global unions and firms was legally enforceable. But equally important was the dramatically enhanced leverage over suppliers secured through firm collective action, with accord factory accreditation functioning as a “license to export” to Europe. Meanwhile, accord safety inspections were both independent and transparent, with inspection reports and corrective action plans (CAPs) publicly available via the accord website. This meant that not only accord signatories but other potential buyers could check the safety status and remediation progress of a factory. Finally, the accord also emphasised the importance of worker voice in securing safety and provided training both to factory safety committees and all-employee meetings, using the latter to advertise its complaint mechanism for individual and collective concerns. Firm collective action was obviously central to the success of the accord, but so too was the role of the global unions as enforcers, holding the signatories to their commitments.

Given its success, the accord model has been proposed as a potential solution for persistent safety deficits in Pakistan’s garment industry as well as a means of addressing wider problems in global supply chains. Recently the approach has been adopted in an attempt to tackle gender-based violence (GBV) in apparel factories in Lesotho. Lesotho-based trade unions and women’s rights organisations along with the Worker Rights Consortium, Solidarity Center and Workers United signed a set of agreements with Nien Hsing Textile, Levi Strauss & Co., The Children’s Place and Kontoor Brands (makers of Lee and Wrangler) to address persistent gender-based violence and harassment at Nien Hsing Textile factories in Lesotho.  The experience of the accord also facilitated the formation of Action Collaboration Transformation (ACT), an agreement between IndustriALL global union and a group of garment brands and retailers, designed to secure living wages for workers in garment supply chains through industry collective bargaining and reformed purchasing practices. (A comprehensive analysis of extant and historical TIRAs and national multi-party supply chain agreements and can be found here).

TIRAs involving multiple firms and global union organisation(s) have several advantages. The participation of global union organisations potentially provides a multi-level enforcement mechanism, with lead firms monitored by global unions and suppliers in target countries by global union affiliates. This is important in initiatives such as the Lesotho GBV agreement where worker voice is a key enforcement and empowerment mechanism. Meanwhile, given sufficient coverage, lead firm collective action can address the collective action problems that pertain between buyers seeking to raise standards – that they will be undercut by less scrupulous competitors. Sourcing guarantees underwritten by binding agreements with global unions can do the same for suppliers and participating producer countries. This is the mechanism envisaged by ACT, alongside multi-level industrial relations mechanisms, with IndustriALL negotiating with signatory brands regarding purchasing practices, IndustriALL and signatory brands encouraging industrial relations actors in garment-producing countries to the bargaining table, and local industrial relations actors negotiating industry-wide collective agreements. This highlights another benefit of TIRAs – they serve to promote freedom of association and right to collective bargaining, now enshrined in international soft law in the form of the UN Guiding Principles on Business and Human Rights.

TIRAs thus offer an approach to governing global supply chains with the potential to address many of the problems encountered by unilateral CSR approaches to raising labour standards. Yet although there were spillover effects from the accord, with the trusting relations built up within that initiative facilitating the development of other TIRAs, notably ACT, so far the number of firms participating is small. For example, while the Accord had 222 company signatories, ACT currently has 20. Attempts to implement the initiative in ACT’s first target country, Cambodia, have so far been stymied by a lack of corporate members. The Cambodian employers’ association GMAC wants a greater proportion of buyers to join ACT before committing to an industry collective bargaining agreement, but without evidence of a successful pilot, ACT is struggling to recruit further firms.

Generally, firms have only signed up to TIRAs either when forced to by activist mobilisation, or, as in the case of the accord, in the aftermath of a large-scale focusing event. When the accord was extended in the form of the 2018 Transition Accord, brand signatories had to be cajoled not only by pressure from trade unions, but also campaigning by global advocacy groups such as SumOfUs, which ran an online campaign shaming companies which were slow to sign. Currently affiliates of IndustriALL are campaigning to push Adidas to join ACT, with the Adidas New York flagship store targeted by a rally on 29 October 2019. But campaigning organisations such as the Clean Clothes Campaign (CCC) have so far not lobbied firms to join ACT, with the CCC maintaining a sceptical stance that ACT will deliver only modest wage improvements. This represents a difference in strategy, with IndustriALL focusing on the long-term benefits of industry collective bargaining, and CCC stressing the responsibility of lead firms to pay a living wage now.

There has also been opposition in producer countries. The Bangladesh government and the BGMEA, the garment industry’s employers’ association, were unhappy about the extension of the accord, and fought a legal battle to exclude the accord from the country. Two key reasons for this were suppliers’ perceived lack of voice within the accord, and the perception that suppliers were bearing the burden of safety remediation with little help from global brands. Eventually compromise was reached with the establishment of the RMG Sustainability Council in Bangladesh, a national initiative uniting industry, brands and trade unions ‘to ensure a sustainable solution, based on a unified compliance standard.’ This offers some hope of engaging local actors, but also bears a risk that the independence and stringent enforcement that characterised the Accord may eventually be eroded. As noted above, Cambodian employers have also been cautious about the ACT initiative. At the same time, Cambodian unions have lobbied for the ACT pilot, while Bangladeshi unions affiliated to IndustriALL supported the continuation of the accord’s mandate.

TIRAs offer a route beyond the traditional auditing approach to raising labour standards. The accord showcased the potential benefits of engaging global unions in raising labour standards in global supply chains, transforming the safety of the factories included in its programme. A few global firms appear to have absorbed this lesson, but others are resisting involvement or remain to be convinced. Likewise, employers and governments in producer countries are cautious. Alliances between global and local unions, as well as campaigning organisations in the civil societies of buyer and producer countries, are required if TIRAs are to assume a greater role in governing labour standards in supply chains. The route to the accord’s adoption – a major tragedy that shames global brands and local actors into action – does not bear thinking about.

Sarah Ashwin is professor of comparative employment relations in LSE’s department of management. She is currently researching the governance of global supply chains in the garment industry. The stakeholder report can be found here. Her previous research includes projects on workers’ responses to economic reform in Russia, and gendered power relations in Russia. Professor Ashwin is a member of the editorial board of Gender & Society and on the advisory board of the British Journal of Industrial Relations.