Anti-systemic political movements have emerged in recent years in a large number of countries across the globe. These parties generally fuel their public support with anti-elite and anti-establishment rhetoric, which in Europe often translates into a strong critique to the European Union and its institutions. The EU is regarded by the supporters of anti-system movements as distant from the real, day-to-day, economic challenges  and as a binding constraint to the capacity of national governments to deliver a more equitable distribution of prosperity. The inability of mainstream politics – of which the EU is seen as a natural expression – to deliver timely and credible answers to the economic needs of large strata of the electorate has been linked to electoral behaviour by a growing body of research (e.g. Rodrik, 2018; Guiso et al., 2018). However, it remains unclear how the EU can practically make a difference to the economic prospects of millions of EU citizens and, through its visible impact, influence their electoral preferences.

The majority of the benefits from the process of economic integration materialise through adjustments in prices and quantities that are difficult for citizens to directly link to EU policies. However, a set of concrete policy actions – funded through the EU budget – are intended to visibly and clearly impact the economic opportunities available to EU citizens. Among those, the lion’s share of financial resources goes to regional development interventions under the EU Cohesion Policy.

Our recent study leverages the case of the EU structural funds, the key EU policy tool targeting the economic challenges that have been linked to the world-wide rise of anti-system electoral preferences. The study exploits a quasi-experimental setting in the UK context, where some territories were classified as ‘in highest need’ of socio-economic support by the EU – and hence entitled to receive the highest form of EU funding – when the referendum on Brexit was held. The paper investigates whether this ‘special’ treatment in terms of EU financial support has influenced the vote at the referendum in beneficiary areas.

While some evidence has been produced to show that financial disbursement through EU Cohesion funds is related to lower Eurosceptic feelings other studies are more critical of any direct voting impacts produced by European regional policy (e.g. Becker et al. 2017). This suggests that the role played by EU transfers for the fostering of pro-Europe attitudes is far from clear. What makes EU Cohesion resources spread ‘love’ for the European Union remains to be explored.

Under what conditions (if at all) can EU Cohesion Policy influence support for the European Union? Is the capacity to deliver enhanced economic opportunities in the areas targeted by Cohesion Policy that pays off in the ballot box? If the fundamental drive for anti-system votes rests on economic motivations, improvements in local economic conditions experienced by voters in beneficiary areas should – assuming all else is held constant – improve their preferences for EU integration.

We address these research questions by focusing on the context offering arguably the most obvious case of a democratic vote either in favour or against the European Union, the 2016 United Kingdom referendum on EU membership. The Brexit vote represents the ideal setting to investigate the impact of EU funds on Euroscepticism, not only for the nature of the vote being explicitly and uniquely centred on the EU [1], but also because in the UK some areas have received very large proportions of financial aid in the form of EU structural funds over the last years. In these places, voters at the 2016 referendum were not just choosing the future of their country within or outside the EU, but they were also expressing their preference on whether to retain EU financial support.

Our results suggest that, all else equal, wards targeted by the highest proportion of EU funds have not behaved differently from less subsidised areas when it comes to supporting EU membership in the ballot box (Figure 1). 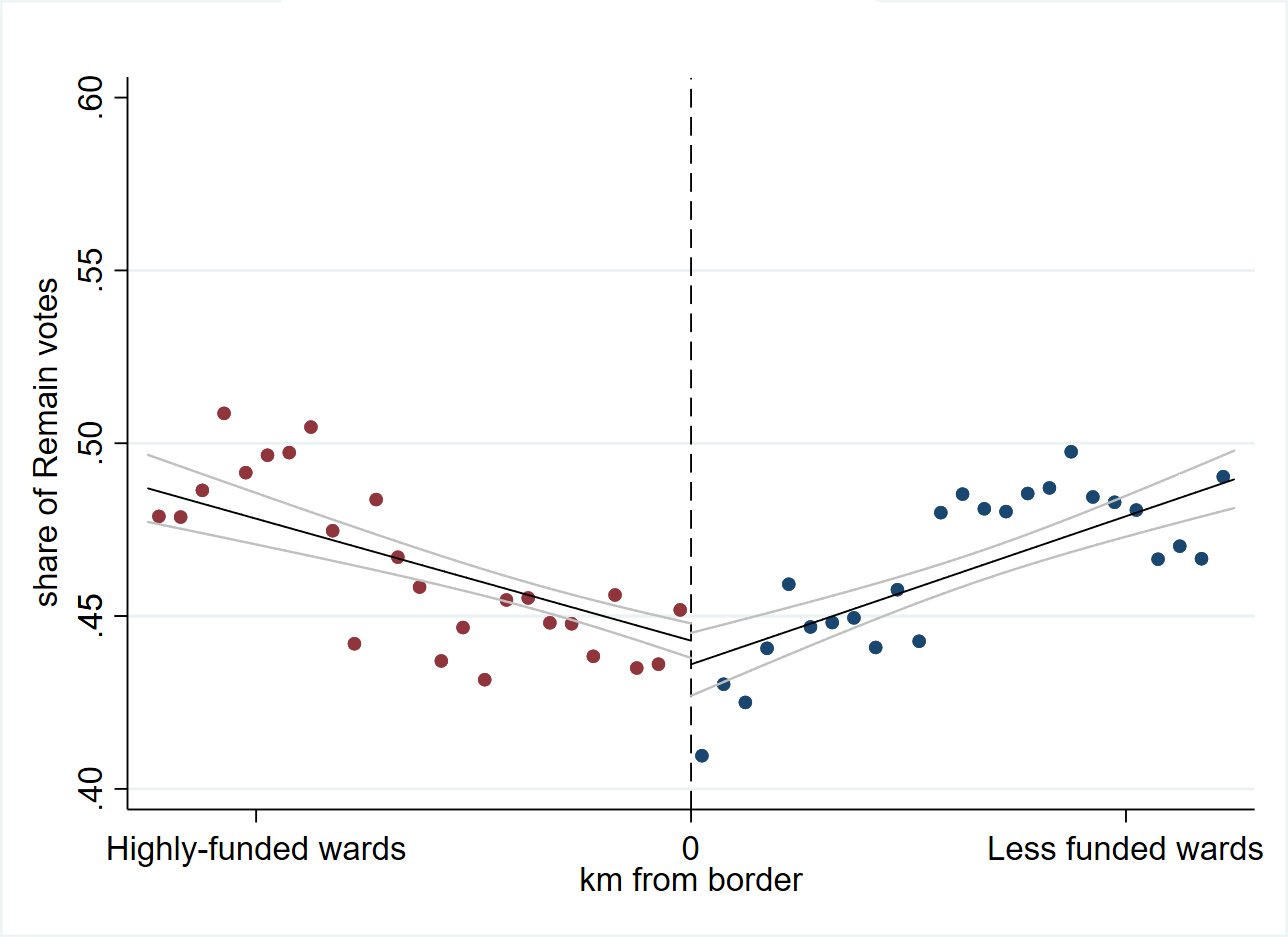 Conversely, voters are more prone to support EU membership if EU funding is coupled with tangible improvements in local labour markets (Figure 2). A significant decrease in the level of unemployment is robustly linked with fewer eurosceptic votes in areas highly-funded by the European Union, vis-à-vis less well-funded territories. This result, offers (for the first time) causal evidence that being in receipt of EU funds does not ‘automatically’ make local citizens more supportive of the European Union. Only where EU investments are combined with a generation of new employment opportunities and a positive socio-economic transformation of local territories – an explicit target of EU development policies – citizens are more likely to electorally support the EU as the promoter of positive change in their surrounding economic environment. Further empirical tests seem to suggest that labour market dynamism in beneficiary areas is more likely to lower Eurosceptic votes if citizens are more aware of EU interventions, therefore more directly linking positive change with EU interventions. 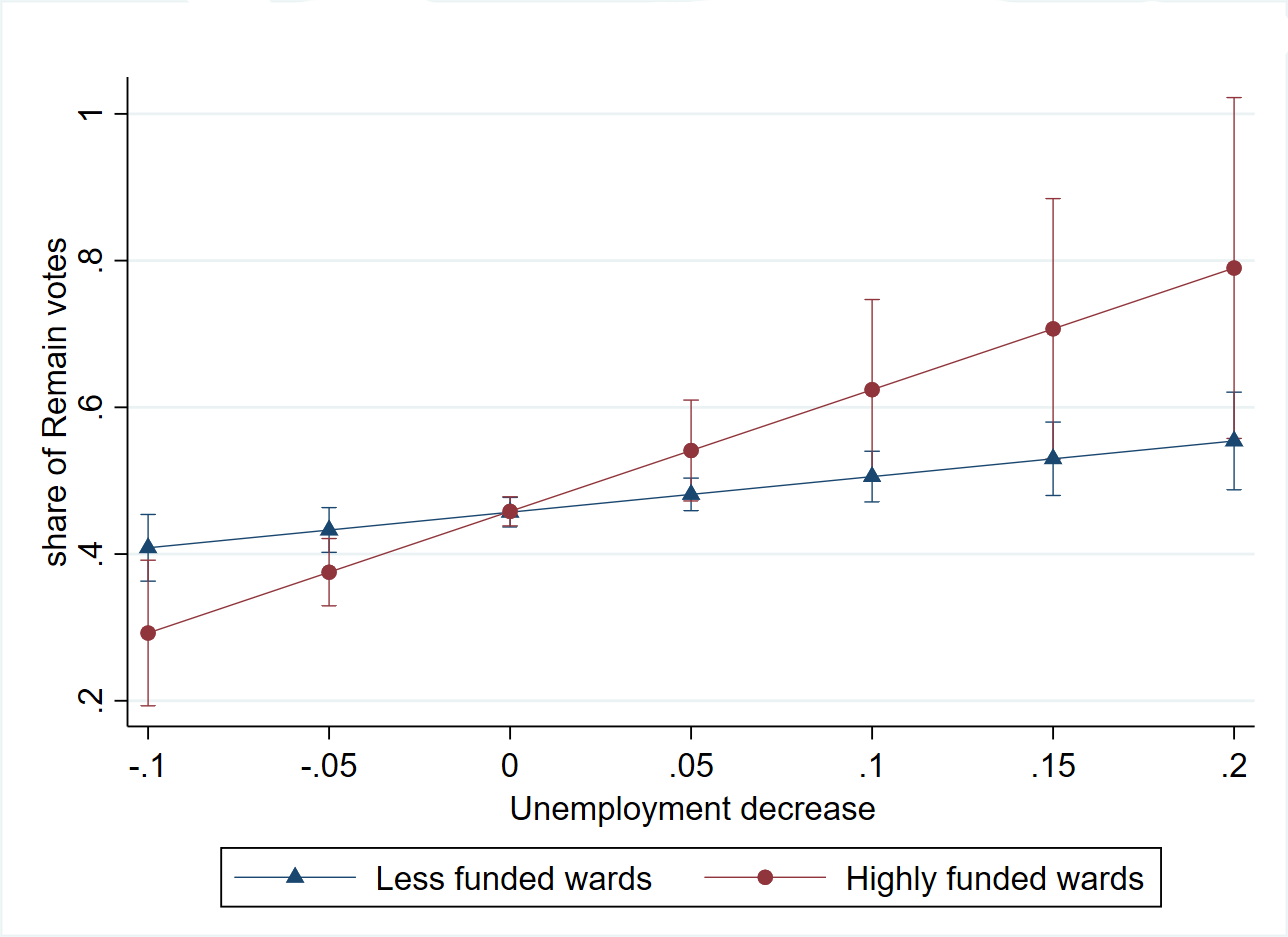 Our results document that EU Cohesion funds help ‘spread love’ for the EU only if citizens witness clear improvements in their living standards during the funding period. Support for the process of European integration is strongly influenced by economic factors, with special reference to labour market opportunities. Discomfort and resentment of EU citizens can indeed be mitigated and channelled towards constructive and internationally cooperative political options. However, what seems to matter for citizens is not the financial aid targeting less developed regions, but rather the capability of these funds to concretely mitigate the lack of economic opportunities. Areas most heavily funded by the EU tend to develop a more favourable view of Europe if (and only if) citizens observe visible socio-economic improvements in their local communities with potential personal benefits from EU intervention.

In this perspective, future support for the process of European integration is highly dependent on the capacity of all EU policies to deliver concrete benefits to be felt at the local level. Impactful policies are therefore a fundamental tool to buy-in citizens from less developed regions into the EU project. Money cannot buy love (for the EU), but impact and positive transformation certainly can.

[1] While any election featuring Eurosceptic parties enables voters to express anti-EU preferences, what makes the Brexit Referendum unique is that all voters opting for ‘Leave’ – even if not explicitly driven by resentments against the EU – expressed a clear and unambiguously Eurosceptic choice. Differently, votes for anti-Europe parties at national elections may be completely unrelated with their Eurosceptic platform.

Riccardo Crescenzi is a professor of economic geography at LSE and is the current holder of a European Research Council (ERC) grant. He is an associate at the Centre for International Development, Harvard Kennedy School of Government, and is also affiliated with the European Institute, Centre for Economic Performance (CEP) and the Spatial Economics Research Centre (SERC) at LSE. He has been a Jean Monnet fellow at the European University Institute (EUI) and a visiting scholar at the Harvard Kennedy School of Government, Taubman Centre, Harvard University and at the University of California Los Angeles (UCLA). He has provided academic advice to, amongst others, the European Investment Bank (EIB), the European Parliament, the European Commission (DG Regional Policy), the Inter-American Investment Bank (IADB) and various national and regional governments.

Marco Di Cataldo is an ERC post-doctoral fellow at LSE’s department of geography and environment. He completed his PhD in Economic Geography at the LSE in January 2018, and is a member of the MASSIVE project and the the editorial board of the LSE GILD blog. His research is focused on regional economic development, the analysis and evaluation of EU policies, public economics, political economy, and the economics of organised crime. His most recent works include research on the impact of collusion between mafia and politics on local public finance, the evaluation of EU Cohesion Policy in the UK, the determinants of Brexit, and the effectiveness of public policies for the attraction of FDI.

Mara Giua is an assistant professor of economics at the University Roma Tre (Italy) and a visiting fellow at LSE. Her research is focused on regional economic performance and public policies for regional development. She is particularly interested in territorial imbalances and regional economic disparities across Europe and into the analysis of regional, urban and internationalisation policies (genesis and ex-post impact).