The Theft of a Decade: How the Baby Boomers Stole the Millennials’ Economic Future – Book Review 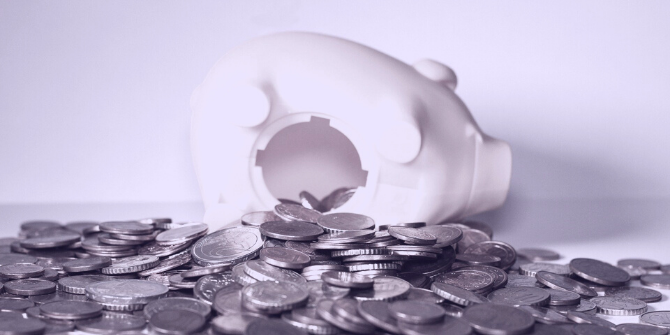 If you are interested in this book review, you may like to listen to this ‘Extra Innings’ episode of The Ballpark podcast in which Joseph Sternberg talks to Ballpark host Chris Gilson about his book.

The Theft of A Decade: How the Baby Boomers Stole the Millennials’ Economic Future. Joseph C. Sternberg. PublicAffairs. 2019. 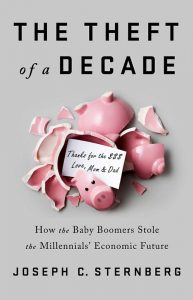 ‘How is it that the Baby Boomers who are bequeathing their children such a comfortable today have also managed to steal those children’s tomorrow out from under them?’

In The Theft of A Decade, Joseph C. Sternberg begins by pointing at the paradox facing Millennials today: daily life is easier, safer and more comfortable than ever before, but finding a job with long-term security, or purchasing one’s first house, is much harder. Sternberg, a member of the editorial board at the Wall Street Journal, asserts that this predicament is not of the Millennials’ own doing, but is in fact an outcome of the poor policy decisions taken by the Baby Boomer generation. He breaks down the historic events that led to the current economic environment as an appeal to the Baby Boomers to recognise their mistakes and allow the Millennials an opportunity to solve their own troubles.

It is probably best to start out by defining who the Millennials are. As Sternberg puts it, Millennials are older than most people realise – the oldest are somewhere in their late thirties or early forties and the youngest have either just finished school or graduated university. This ambiguity is because there is no clearly defined start or end point to the Millennial generation (sometimes also referred to as Generation Y), unlike the Baby Boomer generation which ran between 1946 and 1964. What defines a Millennial, as Sternberg states, is the one experience that they all share: their adult lives have been overshadowed by the events following the 2008 global financial crisis. The early Millennials, like Sternberg himself, were lucky to have gotten their first jobs before the financial crisis. The majority of the Millennials, however, have only known the labour market during the ‘deepest recessions and the slowest post-recession recovery in American history’.

A common assumption before the financial crisis had been that the lowest-paid, lowest-skilled jobs were the most vulnerable to economic fluctuations. To an extent this is true – low-skilled routine jobs have been on the decline regardless of the economic environment. However, during the financial crisis, it was actually the mid-wage jobs that took the greatest hit. The share of mid-wage jobs as a proportion to overall employment shrank between 2007 and 2013. As a result, the older mid-tier workers, typically of the Baby Boomer generation, have moved down the career ladder, pushing out the Millennials who were just starting out.

The reason behind the poor labour market conditions is that the government prioritised ‘debt-fuelled, short-term growth’ over ‘job-creating’ investment. The short-term interest rates had been low for several years, and ‘quantitative easing’ pursued as a response to the financial crisis aggressively reduced the long-term interest rates as well. Together, this made it more lucrative for companies to engage in debt-funded share buybacks rather than make long-term investments in labour. Making matters even worse was the Affordable Care Act that tied insurance to employment, making labour even more expensive. Thus, Sternberg demonstrates, the first major theft by the Baby Boomers.

The focus on low-interest rates and cheap financing didn’t just prevent the Millennials from entering the labour market; it also effectively created an entry barrier in the housing market too. This is the chapter where Sternberg is at his finest. Sternberg points to several shows that Millennials grew up with, from Home Improvement to MTV’s The Real World. These shows highlighted what it means to own property: ‘Owning your home is the sign that you’ve fully ‘‘arrived’’ in adulthood.’ Unfortunately, while even the youngest Millennials are now adults, few have ‘launched’.

In 1990, when home ownership among younger buyers of the Baby Boomer generation fell by three percentage points over the last decade to 57 per cent, politicians were rightly concerned. They feared that too many people, especially those among the less privileged, were missing out on the benefits of home ownership, the main form of wealth accumulation over the decades. In an effort to rectify this issue, the US Congress lowered lending standards and aggressively pushed Fannie Mae and Freddie Mac to get as much as 50 per cent of their loans to low- or middle-income borrowers. When interest rates were cut following the bursting of the dot-com bubble and the 9/11 terror attacks, the market for mortgage-backed securities (MBS) took off. The mortgages at Fannie Mae and Freddie Mac were considered ‘safe’, were available in large supply and offered higher returns than other markets.

“There were trillions of dollars’ worth of mortgage-back securities available for investors to buy, they were supposed to be safe, and they offered a higher rate of return when returns for many other assets had been driven down by low Federal Reserve interest rates.”

Sternberg’s commentary on this series of events is rather poignant. The value of home ownership is through its accumulation of equity, ‘helped by an amortising mortgage requiring a substantial down payment’. By lowering the lending standards, the government had boosted housing debt rather than housing equity, under the false belief that housing prices would rise indefinitely. They did not. As the Federal Reserve began raising interest rates to cool down the economy, mortgage rates crept up, and house prices stagnated. What followed was ‘a particularly wretched bit of financial history’ that has shaped much of the Millennial experience. The consequent policies taken by the government were aimed at ‘saving the housing for those who already owned homes’, and that is where the problem starts, asserts Sternberg. Through the propping up of house prices, the availability of refinancing opportunities and the strengthening of financial regulations, the Millennials are now locked out of the housing market.

In The Theft of a Decade, Sternberg weaves a rich tapestry of historical context, political decisions and economic examples to explain the predicament for Millennials today. At times, this can feel quite overwhelming, which Sternberg alludes to himself. About two-thirds of the way into the book, he provides no ‘bulleted list’ or ‘a plan for a law’ to solve any of the problems he discusses facing the Millennials. Instead, what he hopes to do – and in some chapters, he has definitely achieved – is to ‘hint at solutions’ by discussing these issues in detail. In this sense, The Theft of A Decade is not about putting forward new ideas, but about presenting a compelling summary of the conversations the Millennials are most interested in having.

Sumaiya Rahman recently completed her PhD in economics, focusing on intergenerational mobility in the UK, at the University of Surrey. She is now working as an analyst at an economics consultancy in London. She can be contacted by email at [email protected] or via twitter, @RSumaiya.